Fluorination of plastic packaging provides the precursors of PFAS, PFOS. On July 23, 2020, the NYS Legislature consequently banned the use of PFAS in food packaging
(https://www.foodpackagingforum.org/news/state-of-new-york-set-to-ban-pfas-in-food-packaging). Kortrax® contains no health-damaging PFAS, PFOS.

PFAS, PFOS compounds, precursors of fluorination, are used for water, oil, and stain repellency, heat resistance, and chemical permeation reduction in packaging, clothing, paper, cookware, furniture, hydraulic oils, gaskets, seals, and a host of other consumer and industrial products. There is evidence that exposure to PFAS can lead to adverse health outcomes in humans. The most-studied PFAS chemicals are PFOA and PFOS. Both chemicals are very persistent in the environment and in the human body – meaning they don’t break down and accumulate over time.(https://www.cdc.gov/biomonitoring/PFAS_FactSheet.html)

Studies indicate that PFOA and PFOS can cause reproductive and developmental, liver and kidney, and immunological effects in laboratory animals. Both chemicals have caused tumors in animals. In fact, these chemicals have been found in food, drinking water, surface water, human tissues, blood, plasma, milk, body fluids, soil, wild and domestic animals, plants, arctic ice, and particulates in the air. (https://www.epa.gov/sciencematters/understanding-pfasenvironment#:~:text=PFAS%20can%20enter%20the%20environment,effects%20in%20animals%20and%20humans).

Kortrax® is an engineered polyamide barrier resin that when blended with high-density polyethylene (HDPE) resin is used in the manufacturing of containers (aka Baritainers®) with barrier properties that HDPE alone cannot provide. Kortrax® imparts the chemical resistance associated with a fluoropolymer treatment of HDPE containers and adds the benefit of oxygen, carbon dioxide, and water vapor permeation inhibition as well. (https://baritainer.com/)

Fluorine or fluorine compounds are not utilized when Kortrax® is included within HDPE containers, and recent analysis has not identified any PFAS, PFOS compounds in containers or filling goods stored in Kortrax®/HDPE constructed packages. None of the ingredients of Kortrax® have been identified as being on the list of OECD PFAS, PFOS precursors. And Kortrax® is FDA and EU compliant with recycle code 2. (https://baritainer.com/technology/)

The usage of Baritainers® constructed from Kortrax® and HDPE offers a human safe and environmentally recyclable alternative to fluorinated containers for food, consumer, and industrial applications. BP Polymers continues to monitor the PFAS, PFOS situation and will offer safe, alternative solutions for packaging foods, fragrances, cosmetics, health and beauty, pharmaceuticals, pesticides, solvents, and other critical chemicals.

ABOUT BP POLYMERS, LLC:
BP Polymers was founded in 2009 after years of extensive materials research and product development. Based in CA and VA, BP Polymers is the sole US manufacturer of Kortrax® Barrier Resins. BP Polymers’ sister company, Barrier Plastics, Inc., is also located in CA and VA and is the home of Baritainers®. For more information, please visit us at 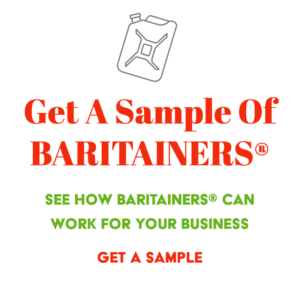 Baritainer in the. News

Where You Can Buy Baritainers®